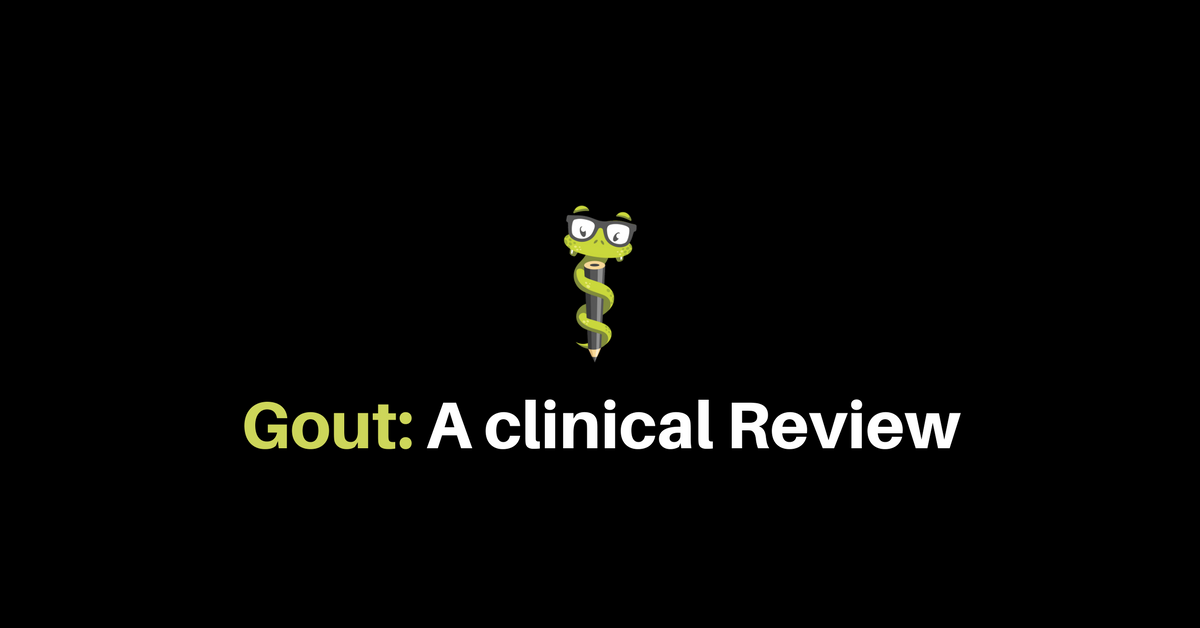 Click here to get our free clinical lab guide

It was a late fall mid-morning when I got a call back to my office. I had a mid-80-year-old patient, that was getting added onto my schedule acutely, for foot/calf swelling, redness, and warmth.

In my head, I was thinking, “Oh great, is this patient a ticking time bomb with a DVT.”  Unfortunately, the patient did not give any more information about the symptoms over the phone.

I briefly glanced through the chart assessing the patient’s past medical history and medications to see if there was anything significant that could give me a leg up on the diagnosis.  As I looked, I saw that there was a history of atrial fibrillation, chronic kidney disease, hypertension, and hyperlipidemia.

I thought perhaps there was CHF that wasn’t caught, and the swelling could be due to that, but that wouldn’t likely explain the redness and warmth.  There were no recent surgeries or malignancy.

Time passed on, the patient arrived, and the nurse roomed that patient.  The nurse came out of the room and told me, “the redness is pretty much just on one of the toes, none in the foot or calf.”  That completely changed my upcoming line of questioning and differential diagnoses.

When I walked into the room, the patient had their leg propped up on the bed without any shoe or sock, and the diagnosis was looking me right in the eye.  A big red, warm, tender, first metatarsophalangeal joint was seen.

Gout affects more than eight million Americans yearly, leading to seven million walk-in office visits annually.  Some risk factors for gout include sex, age, diet, and genetics, which lead to increases in the uric acid level.  We will discuss all of these further below.

Two common reasons for the excess uric acid, which leads to gout symptoms, are overproduction or more commonly underexcretion of uric acid.  This is due to malformations in the kidney’s urate transporter system.

As patient’s age the risk of gout increases and peaks in prevalence at 12 percent in patients over 80 years old.  In females, sex hormones result in an increased ability to excrete uric acid via the urinary system, leading to premenopausal women having a lower likelihood of having gout.

Foods high in purines such as oatmeal, asparagus, legumes, nuts, and mushrooms do not appear to lead to more gout flares than the general population.

Why Does Gout Occur

I keep referring to elevated uric acid levels, but why?  Gout results from the accumulation of monosodium urate crystals in a joint.  The crystal accumulation triggers an immune reaction with the release of neutrophils and inflammatory cytokines.  With time and progression of the disease, the joint can become irritated and damaged leading to chronic pain and the presence of tophi.

Regarding the location of gout, it most commonly affects the metatarsophalangeal joint.  Other places such as the ankles, fingers, knees, elbows, wrists, and the midtarsal joint can be affected as well.

As in my patient case above, gout is often diagnosed clinically with the quick onset of monoarticular arthritis with swelling and redness.  The American College of Rheumatology provides a list of criteria for the diagnosis of gout as below. 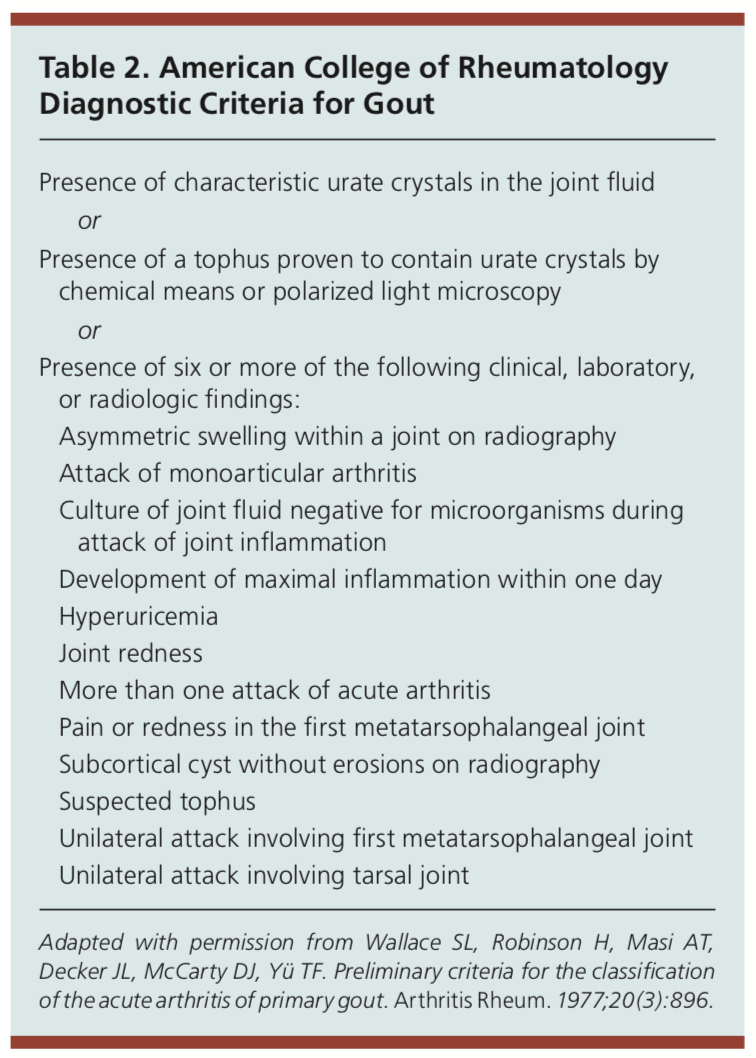 Other tests and imaging that can be considered to diagnose gout/rule out other differential diagnoses are a CBC, ESR, CRP, uric acid level, and a radiograph of the affected area.

Microscopic evaluation of the joint fluid is used less often.  In ambiguous cases, the diagnosis is made by aspiration of the joint and seeing needle-shaped monosodium urate crystals with negative birefringence on polarized light microscopy.

Back to the diagnosis of gout, other imaging modalities such as ultrasound, MRI, and CT are not regularly needed for diagnosis.

Other differentials to rule out include pseudogout, trauma, septic arthritis, or cellulitis.  Pseudogout will often mimic the same symptoms and presentation as gout and may respond to NSAID therapy.  However, the differentiating factors are the positive birefringence of the crystals on joint fluid analysis, as above, and a normal serum uric acid level.

Septic arthritis may present with fever and elevated WBC level on a CBC.  Joint fluid analysis is required in these cases often needing to be done by orthopaedics.

Trauma to the affected area will often have significant history finding to corroborate this etiology.  Radiograph should be completed to rule out any fracture or acute bony abnormality.

Treatment of gout aims to decrease the pain and swelling associated with the diagnosis rapidly.  Options for therapy include an oral steroid, intravenous steroids, NSAIDs, and colchicine.

NSAIDs have been historically the first line choice of therapy.  Indomethacin is what you will read about in review books as the appropriate NSAID choice, but any oral NSAIDs has been proven to be equally effective.

With an overwhelming number of patients with liver disease/cirrhosis, congestive heart failure, coronary artery disease, and kidney disease, NSAIDs, however, must be avoided in these instances.

A reason why a prolonged taper as above can be favored over a short burst is due to the risk of a rebound flare after discontinuation of a short burst of steroids.

Colchicine as opposed to the other above options for an acute gout flare has no pain relief properties and may be less effective at treating gout flares after three to four days of symptoms onset.  If you choose to use colchicine, give 1.2 mg then 0.6 mg one hour later.

Adverse effects with colchicine include nausea, vomiting, and diarrhea.  This medicine needs to be used with caution in patients with reduced renal function and liver impairment.

In patients with recurrent gout flares, history of gout, CKD, the presence of tophi, or history of kidney stones, urate-lowering medication should be initiated.  The goal of preventative therapy is to reduce the uric acid level to less than 6 mg/dL.

Once a patient’s uric acid has normalized on preventative therapy, their uric acid should be measured periodically to assess the effectiveness of therapy.  Preventative treatment should be given for three to six months after an acute flare if there are no prolonged/ongoing symptoms.  If there are persistent symptoms or multiple flares, prophylactic therapy should be continued indefinitely.

We will talk about which specific medications can be used in a moment, but first, when we talked about risk factors, a lot of those were related to dietary factors.  Patients should try to avoid items high in fructose, purine-rich animal protein, and alcohol.  Also, there has been a link between obesity and prevalence of gout, whereas weight loss reduces the risk of gout.

Medications in which a patient may be taking such as loop and thiazide diuretics have been historically thought to increase gout flares due to causing an increase in uric acid levels.  However, data has shown that with these patients on thiazide or loop diuretics there is only a small increase in the risk of gout flares.

Calcium channel blockers and Losartan (Cozaar) are known to decrease the risk of gout flares.  Losartan is the only ARB known to have this effect, and it is not class-wide.

Medication options for preventative therapy for gout are listed as below: 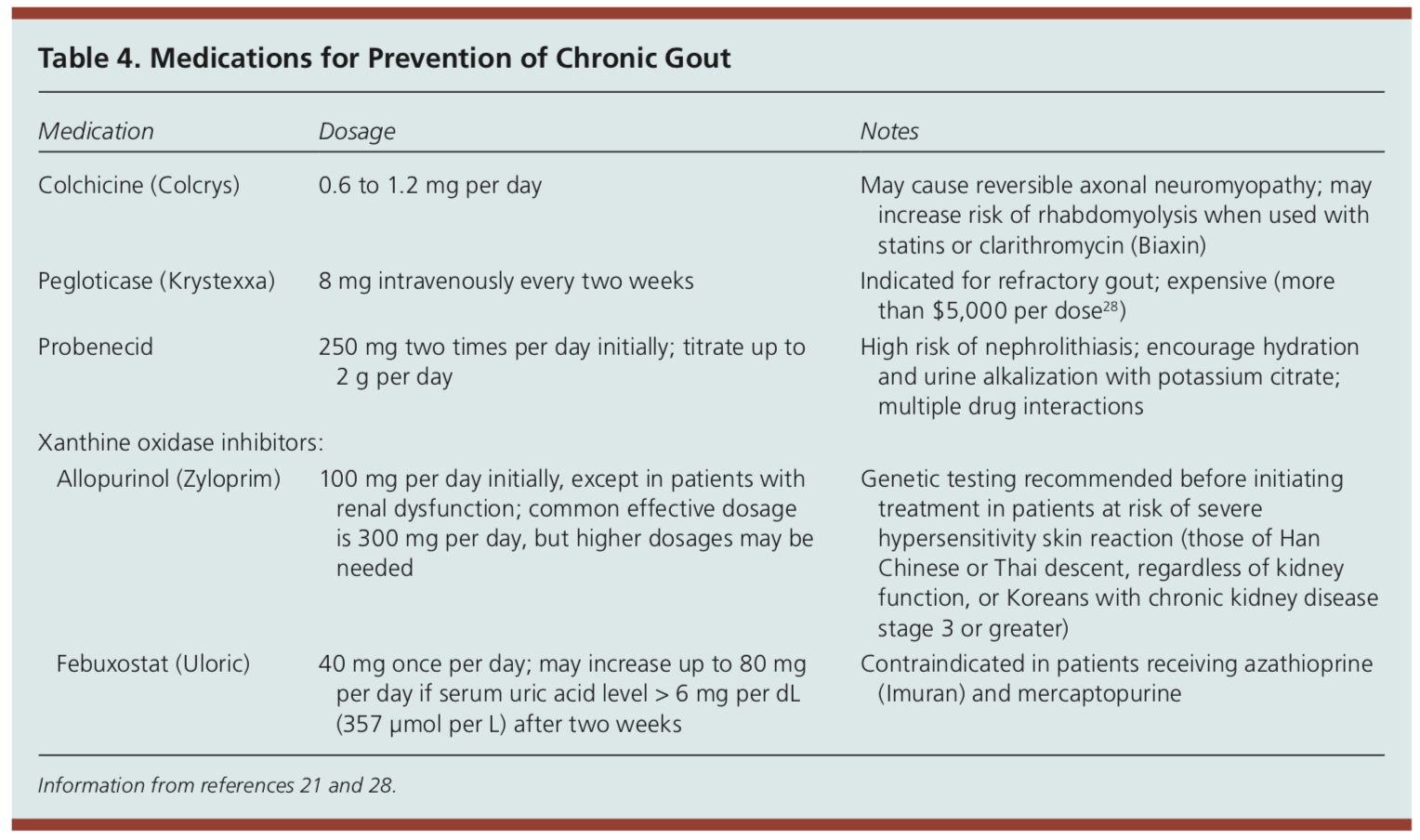 Allopurinol works as a xanthine oxidase inhibitor that is first line to prevent gout flares.  The starting dose of this medication is 100 mg daily, but this is often titrated up based on serum uric acid response.  I typically check a patient’s uric acid level every four weeks as I am titrating their allopurinol until the uric acid level is less than 6 mg/dL.

Additionally, when I start this medication I always check a BUN/Cr to assess their renal function, as this might require the patient to have a lower dose.  Lastly, I check the LFTs to evaluate for any liver disease, which would require dose reduction or discontinuation of the medication.

Specific populations of patients have severe skin reactions to allopurinol.  Screening for HLA-B*5801 is recommended in any patient that is of Han Chinese or Thai descent.  Patient’s that are Korean with CKD stage III require this testing as well.

Febuxostat is another xanthine oxidase inhibitor that was approved for use in 2009.  It has been shown to exceed allopurinol at lowering uric acid levels. However, it is non-superior at reducing the rate of gout flares.  Also, febuxostat is much more expensive than allopurinol.

As mentioned in the treatment of acute gout flares, Colchicine can be used for preventative therapy at 0.6 to 1.2 mg daily. However, there is a laundry list of adverse effects of this medication.  Including worsening of renal function, reversible axonal neuropathy, and rhabdomyolysis, especially with patients on statin therapy.  Therefore, if a patient is on this medication, close monitoring is needed.

Probenecid is a medication that causes an increase in the excretion of urinary uric acid and is considered a second-line medication for chronic gout therapy.  There are quite a few drug to drug interactions with this medicine including between methotrexate and ketorolac.  A common adverse effect of this medication, as you could have guessed based on its mechanism of action, is uric acid nephrolithiasis.

A final treatment option includes Pegloticase which is an intravenous treatment.  It works by metabolizing uric acid to allantoin which is excreted in the urine.  This medication is given IV every two weeks, but the cost is up to $5,000 per dose.  Therefore, it is currently recommended for refractory gout cases and is typically given by rheumatologist.

The Prescriber’s Letter. Consider an Oral Steroid Instead of an NSAID for Acute Gout. Accessed: 1/13/2018.

This blog or podcast should not be used in any legal capacity whatsoever, including but not limited to establishing standard of care in a legal sense or as a basis of expert witness testimony.  No guarantee is given regarding the accuracy of any statements or opinions made on the podcast or blog.