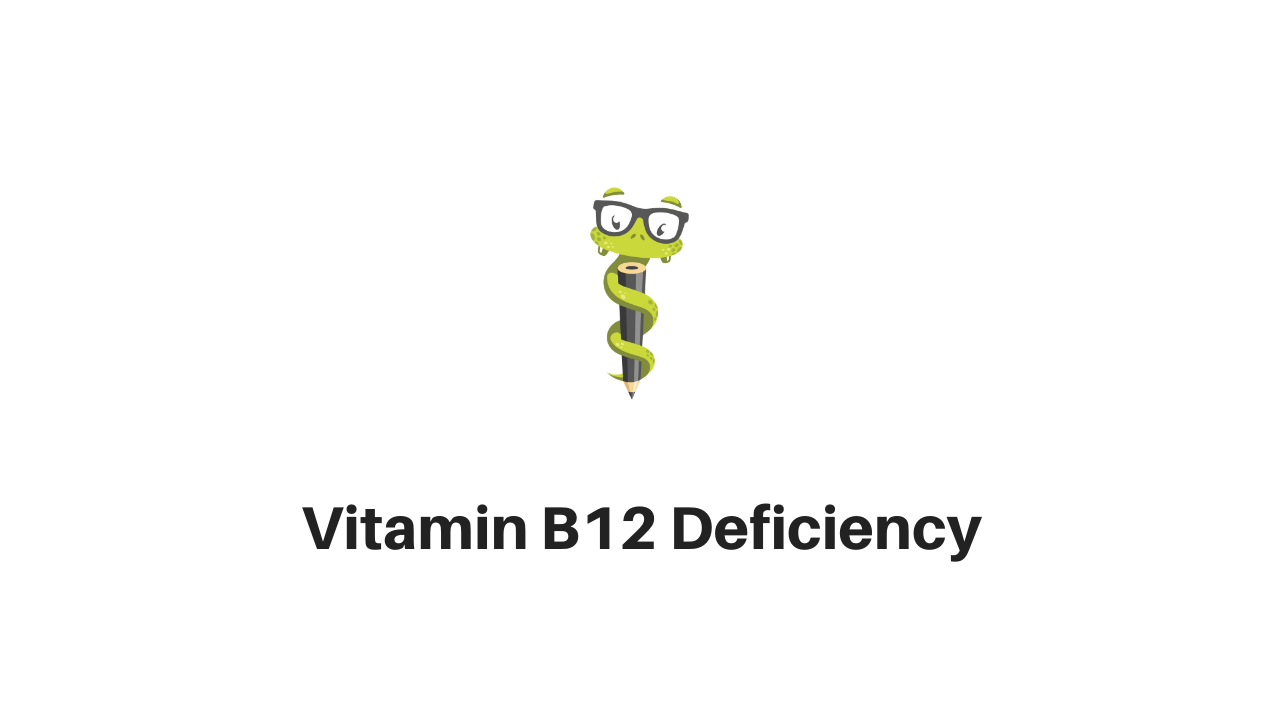 The podcast above and article below share different information. Listen and read to both to get the most out of this post!

In the past, we discussed macrocytosis and macrocytic anemia regarding the evaluation, diagnosis, and possible etiologies for these laboratory findings.

Today, we will be discussing a common underlying cause for the finding of macrocytosis or macrocytic anemia, which is vitamin B12 deficiency.

Vitamin B12 is a water-soluble vitamin that we often acquire through consumption and absorption of dietary items, such as meats, dairy, and fish, as well as other options that are vitamin B12 fortified such as supplements or cereal.  Vitamin B12 is customarily absorbed in combination with intrinsic factor which is made by the parietal cells in the stomach lining, then the vitamin B12/intrinsic factor combination is absorbed at the level of the terminal ileum.

Vitamin B12 plays many vital roles in the typical day to day functions of the human body.  It is essential for:

In the U.S. the prevalence of vitamin B12 deficiency is around 6 percent in those patients who are younger than 60 years; however, this increases to up to 20 percent in those who are older than 60 years of age.  The location of where a patient resides as well can contribute to the likelihood of deficiency, where those who live in Latin American countries have a 40% chance, in Kenya 70%, and East Indian countries a 75% risk of being deficient.

Risk factors for having vitamin B12 deficiency are listed in Table 1 below.

All of the following increases the risk of deficiency formation:

A multicenter study found that patients taking a minimum of 850 mg of metformin three times daily had an increased risk of being vitamin B12 deficient.  This deficiency becomes more likely the longer that the patient has been on metformin therapy.

Vitamin B12 affects many systems within the body, and symptoms and complications of deficiency can range in severity from mild fatigue to neurologic changes or complaints.  Thankfully, our liver holds a large storage reservoir of vitamin B12 which can delay deficiency from occurring for up to 10 years!

If deficiency occurs, bone marrow suppression is commonly seen where all cell lines can be affected with megaloblastic/macrocytic anemia being one of the most common manifestations. The subsequent abnormal blood cell production can cause other laboratory changes including: an increase in haptoglobin levels, elevated reticulocyte levels, and an increase in lactate dehydrogenase (such as what you would see in a hemolytic anemia).

Symptoms of vitamin B12 deficiency can be very broad.

Neurologic changes occur due to demyelination and can present with

Neurologic changes can be transient; however, if neuronal damage or death occurs in the spinal cord changes may be permanent.

Data has shown that there is an inverse relationship between the severity of macrocytic anemia and the stage of neurologic impairment.

B12 Deficiency During Pregnancy

If a woman is vitamin B12 deficient during pregnancy, this can cause complications as well, including:

Women who are at a higher risk of deficiency should receive vitamin B12 supplementation during pregnancy and breastfeeding.

Recommended lab testing includes a CBC and serum vitamin B12 level.  If the results on the vitamin B12 is less than 150 pg/mL, this is considered deficient.  In patients who have alcoholism, cancer, or liver disease, vitamin B12 levels can be falsely elevated.

Patients with this diagnosis will often have asymptomatic gastritis before gastric atrophy, around 10 to 20 years later.

Those patients who have laboratory evidenced vitamin B12 deficiency without risk factors, dietary cause, or malabsorption cause should be tested for pernicious anemia.  This is completed by ordering an anti-intrinsic factor antibody level.

Another regimen may be giving an injection once weekly until the deficiency corrects, then once per month or every other month.

Oral replacement with 1-2 mg daily has been found to be equally effective at resolving anemia as parenteral dosing; however, serum MMA does not correct with oral treatment for vitamin B12 deficiency.  It is recommended for patients that have severely depressed levels or malabsorptive syndromes to undergo parenteral treatment, whereas those with mild disease can be treated with oral replacement.

Prevention is an important topic for a myriad of diseases in healthcare.  This is no different for vitamin B12 deficiency.  The recommended dietary intake of vitamin B12 in adult males and nonpregnancy females should be 2.4 mcg daily, whereas in pregnant females this should be increased to 2.6 mcg daily.  The average intake of those who live in the United States is around 3.4 mcg daily.

Patients who are strict vegan should be counseled and supplemented adequately with vitamin B12 fortified foods.  The American Society for Metabolic and Bariatric Surgery has made recommendations that in those patients who have undergone bariatric surgery should take 1 mg of oral vitamin B12 daily indefinitely.